The Intergovernmental Panel on Climate Change (IPCC), the United Nations body for assessing the science related to climate change, recently released their Special Report on the Ocean and Cryosphere in a Changing Climate (SROCC).

The report is the result of 104 scientists from 36 countries working together over 2 years to assess knowledge on climate change.

The worsening conditions of our planet are, without a doubt, a serious topic needing serious conversation and serious action by everyone. Some may wonder why, then, we teamed up with the Red Cross Red Crescent Climate Centre to release a summary of the report that included cartoons licensed from Cartoons Collections.

In this post on Humor in Unexpected Places, that’s what we’re going to cover.

Why summarize the report to begin with?

The final report released by IPCC is over 1,000 pages with enough science jargon to leave Ms. Frizzle frazzled.

Their summary for policy makers is 42 pages. It’s all important information, but a lot of it is too dense for non-scientists to read. More importantly, the complexity of the issue makes it hard for non subject matter specialist to engage. And in order to tackle climate change, we need very single person’s engagement.

Given that the data in this report effectively impacts every human on the planet, the contents of the report are vital for the general population to see and understand, so the Climate Centre decided to provide a shorter summary that was more accessible to a wider audience.

So why use cartoons along with the summary?

It would be great if creating a “tl;dr” summary was enough to get people to read the report. And maybe they would if they were going to have to do a critical writing assignment on it (at least that’s why I read SparkNotes back in the day).

But in a world where people are increasingly more distracted, getting them to pay attention to what matters most is more important than ever.

If you want people to pay attention to any message, humor is a great strategy to use. The goal with using the cartoons was to make the content more accessible and more enticing to read.

What was the process for adding humor?

Finding the right humor to use for this paper was no small task. A team of nine people, a mix of climate specialists and humorists, got together to come up with the best way to add humor to the summary. One of the primary factors was time as we had roughly 24 hours to release the summary in conjunction with the release of the full report.

For this project, we settled on using cartoons that already existed. There was no time to come up with new humor ideas, try them out, and hope that they worked.

Instead, the Climate Centre partnered with Bob Mankoff and the team at CartoonCollections.com to license cartoons that already existed and, because of their data, we knew already worked.

The next step was to create a framework for how the cartoons would be used. It would have been easy enough to pick a few funny cartoons, scatter them throughout the summary, and call it a day. The problem is that the cartoons then become more of a distraction than a learning aid.

We knew that there were seven core messages that the group wanted to share, so we decided to find a cartoon for each point that would fit under the message. This not only added some humor throughout, but the cartoons also reiterated the key points the group was trying to get across.

For example, this cartoon from Danny Shanahan is funny on its own, but it’s also particularly effective at conveying that the world’s oceans are heating up and the consequences can be categorized as “not good.”

Compare that to this cartoon from Bob Mankoff that is funny but doesn’t really relate to any of the points in the summary. Including it would cause the reader to wonder, “What does this have to do with anything?”

What can we learn from this?

There are a lot of great takeaways from what the Climate Centre did summarizing the report from IPCC:

The goal in adding humor to a serious publication isn’t to try to write the “funniest report ever.” Instead, it is to make the material more accessible and easier to read so that the content actually gets into the minds of the public.

This post is a part of our series on Humor in Unexpected Places.

How to Build Relationships

The final post in our series on relationships is on how to build relationships. If you’ve missed any of the […]

The Skill of Humor TEDx talk – Develop your Humor Skills

We are excited to announce that Drew’s second TEDx talk on The Skill of Humor is now available online. This […] 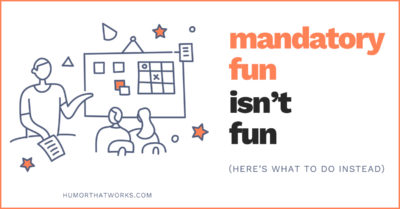 Mandatory fun is something we’ve all experienced at work.  Although it usually starts out with honorable intentions, research shows that […]