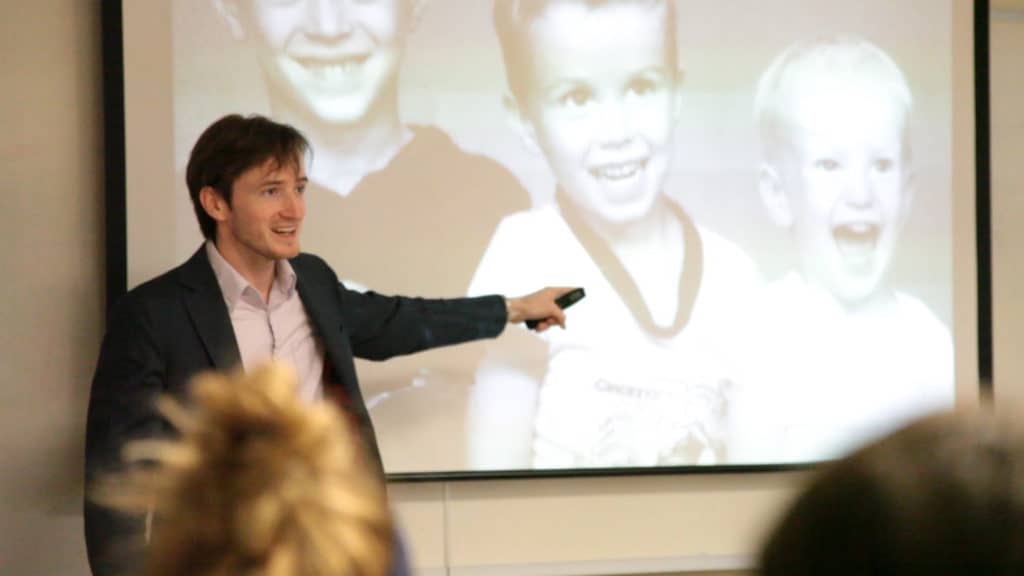 Andrew Tarvin teaches people to get better results while having more fun.

Andrew Tarvin is the world’s first Humor Engineer teaching people how to get better results while having more fun. He has worked with thousands of people at 200+ organizations, including P&G, GE, and Microsoft.

Combining his background as a project manager at Procter & Gamble with his experience as an international comedian, Andrew’s program are engaging, entertaining, and most important, effective.

He is a best-selling author, has been featured in The Wall Street Journal, Forbes, and TEDx, and has delivered programs in 50 states, 18 countries, and 3 continents. He loves the color orange and is obsessed with chocolate.

Andrew Tarvin is the world’s first Humor Engineer. He teaches people how to get better results while having more fun.

After graduating, Andrew worked as global project manager at Procter & Gamble where he managed million dollar projects for a $350 million business, earning multiple internal awards for his leadership, communication style, and jokes he included at the ends of emails (true story). He also continued performing improv and stand-up comedy until he decided to combine his two lives and proclaimed himself the Corporate Humorist of P&G.

In 2008, Andrew moved to New York City to continue to grow in his role as P&G’s corporate humorist, where he led an award-winning effort to bring more humor to the workplace. In 2009, he started Humor That Works, a consultancy on how to use humor to get better results, and in 2012, he left P&G to lead his company full-time.

Since then, Andrew has helped more than 200 organizations increase productivity through humor—including P&G, GE, ESPN, Microsoft, the U.S. Navy, PepsiCo, and the International Association of Canine Professional (also a true story)—and has performed in over 1,000 shows all around the world.

Andrew is the best-selling author of Humor That Works: 501 Ways to Beat Stress, Increase Productivity, and Have Fun at Work and has been featured in The Wall Street Journal, Huffington Post, Forbes, and frequent Facebook posts by his mother. He has spoken or performed in all 50 states, 18 countries, and 3 continents and his TEDx talked has been viewed more than 75,000 times.

He loves the color orange and is obsessed with chocolate.

Want to bring one of my programs to your next event?

The origin story (told through pictures):

Ready to see what I can do for your group?