“There is nothing so useless as doing efficiently that which should not be done at all.” –Peter Drucker

“If you don’t know where you are going, you’ll end up someplace else.” -Yogi Berra

“It is good to have an end to journey toward; but it is the journey that matters, in the end.” –Ernest Hemingway

“Whenever you want to achieve something, keep your eyes open, concentrate and make sure you know exactly what it is you want. No one can hit their target with their eyes closed.” –Paulo Coelho

Cat: Where are you going?
Alice: Which way should I go?
Cat: That depends on where you are going.
Alice: I don’t know.
Cat: Then it doesn’t matter which way you go.
–Lewis Carroll, Alice in Wonderland

“If a man knows not to which port he sails, no wind is favorable.” –Lucius Annaeus Seneca

“A goal is a dream with a deadline.” –Napoleon Hill

“Every ceiling, when reached, becomes a floor, upon which one walks as a matter of course and prescriptive right.” –Aldous Huxley

“A good archer is known not by his arrows but by his aim.” –Thomas Fuller

“If you want to make your dreams come true, the first thing you have to do is wake up.” –J.M. Power

“The only thing that has to be finished by next Tuesday is next Monday.” –Jennifer Yane

“What is not started today is never finished tomorrow.” –Johann Wolfgang von Goethe

“You must have long term goals to keep you from being frustrated by short term failures.” –Charles C. Noble

“The trouble with not having a goal is that you can spend your life running up and down the field and never score.” –Bill Copeland

“The world makes way for the man who knows where he is going.” –Ralph Waldo Emerson

“The great thing in this world is not so much where we are, but in what direction we are moving.” –Oliver Wendell Holmes

“The most important thing about goals is having one.” –Geoffry Abert

Feeling inspired to bring more Humor into the Workplace?

If these inspirational quotes have inspired you, check out our youtube video on What is the meaning of life? A funny spoken word performance. And feel free to contact us if you want training on using humor in the workplace.

12 Companies with Fun as a Core Value

People who use humor at work are more productive, less stressed, and happier so it’s no surprise that using humor and […]

Congratulations to the 2021 Corporate Humor Awards Finalists!!! These organizations and individuals go the extra mile to bring humor into […] 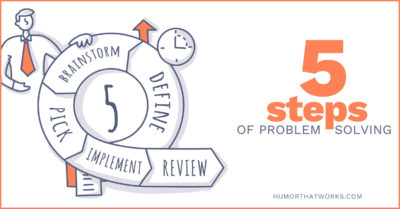 The 5 Steps of Problem Solving