What do you get when you combine a few binder clips, pen caps, a sharpie and brass fasteners? A Star Wars ship of course. 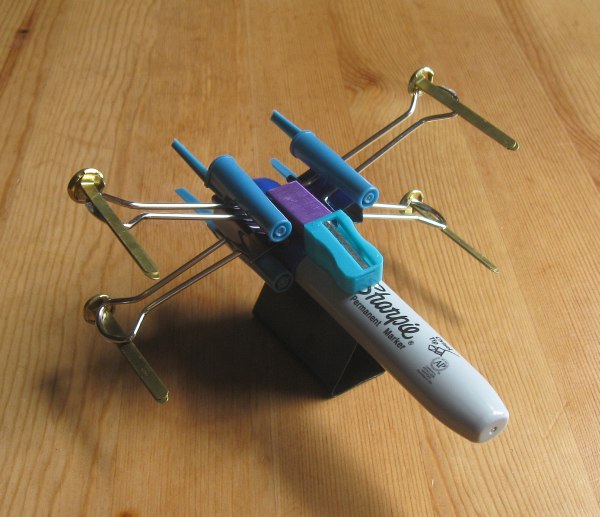 Artistic combination of dry erase markers and what you can see out your window. From windoodles. 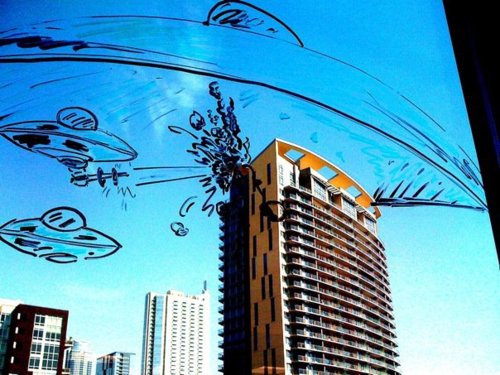 One of the best uses of binder clips (and a staple removal) I’ve seen. 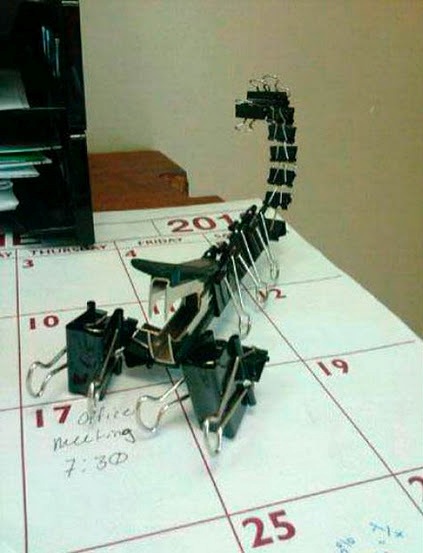 A portrait of Curly from the Three Stooges made with packing tape. By Mark Khaisman. 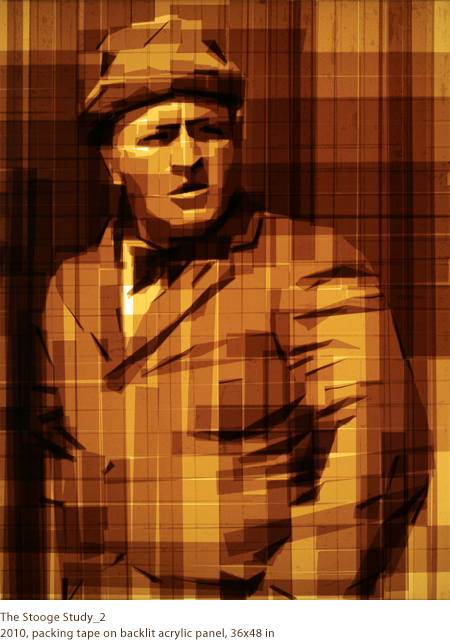 A chandelier made entirely of paperclips. 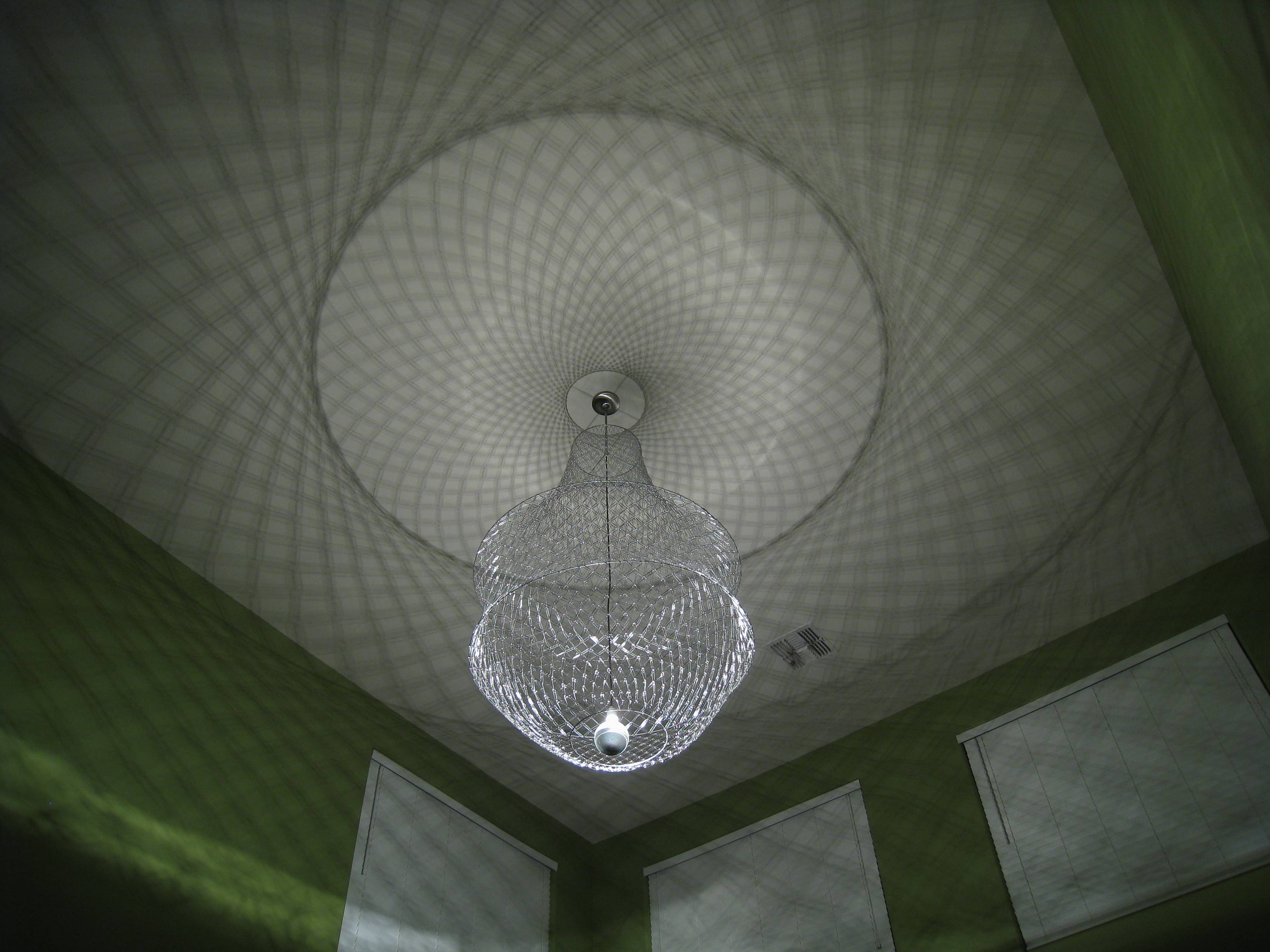 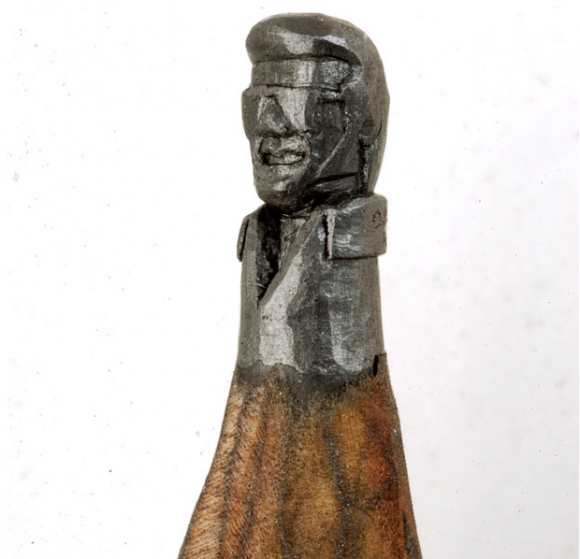 A city skyline made of staples. From ephemicropolis. 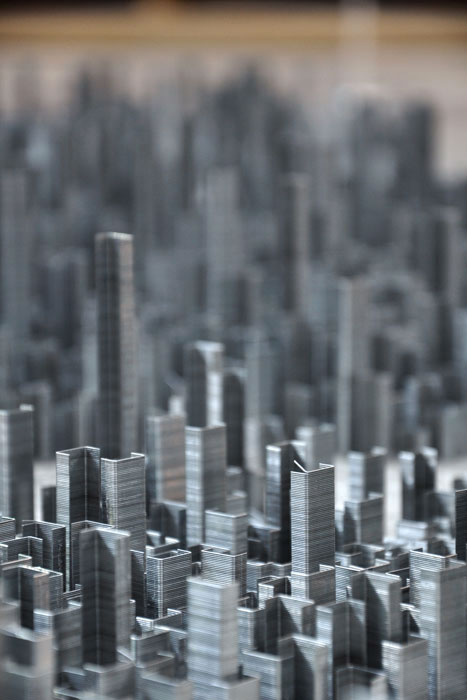 A portrait made entirely from thumbtacks. From Eric Daigh. 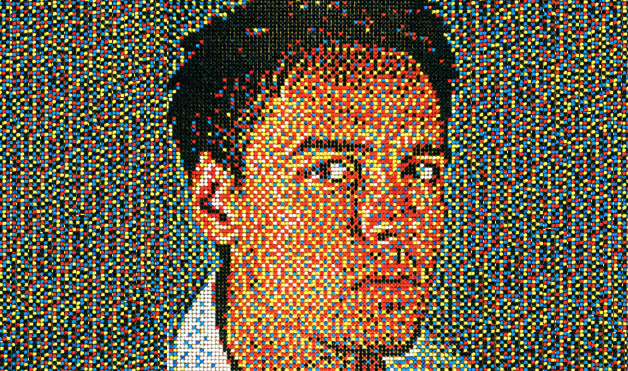 A check-off calendar made with Bubble Wrap.

A romantic animated message using a set of post-it notes.

We recently celebrated the publishing of our first book, and to celebrate we wanted to share some of our favorite humor quotations. If you’re interested in more quotes on humor, check out the book, 50 Quotations on Humor 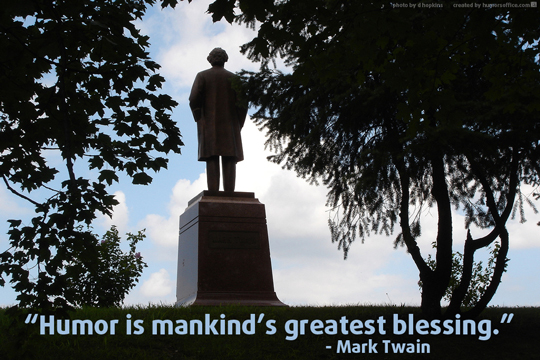 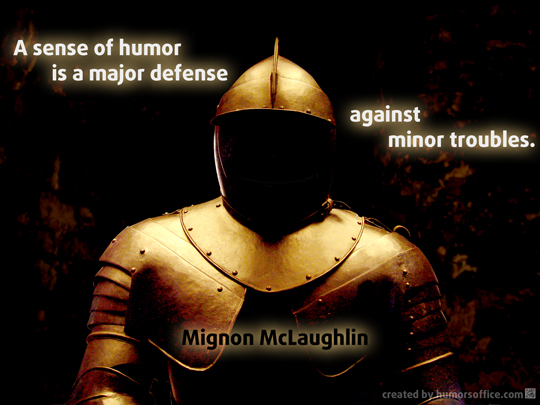 2. “A sense of humor is a major defense against minor troubles.” – Mignon McLaughlin 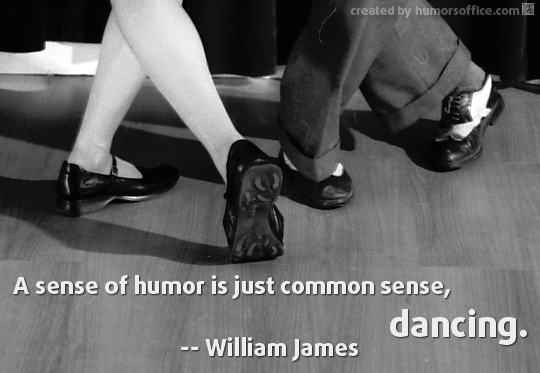 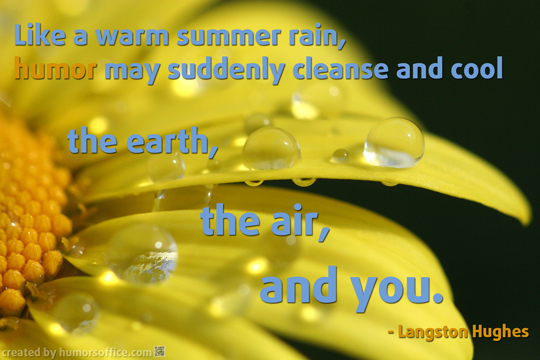 4. “Like a warm summer rain, humor may suddenly cleanse and cool the earth, the air and you.” – Langston Hughes 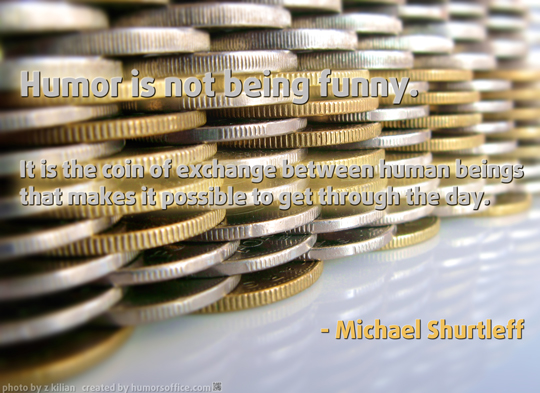 5. “Humor is not being funny. It is the coin of exchange between human beings that makes it possible to get through the day.” – Michael Shurtleff 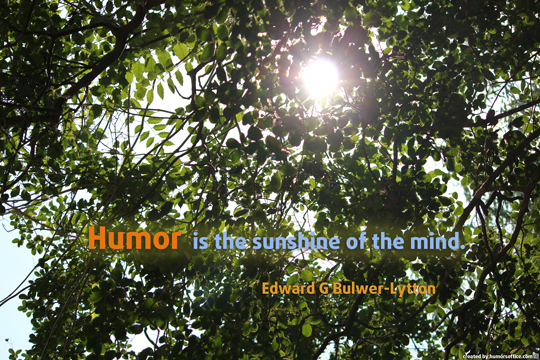 6. “Humor is the sunshine of the mind.” – Edward G Bulwer-Lytton 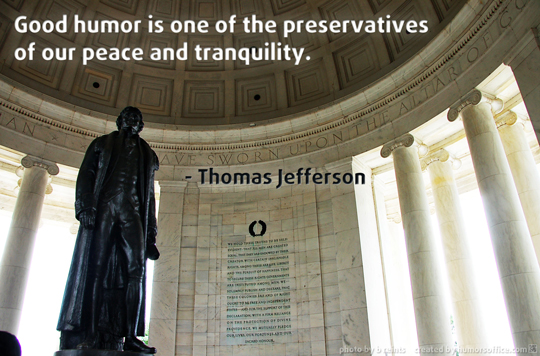 7. “Good humor is one of the preservatives of our peace and tranquility.” – Thomas Jefferson 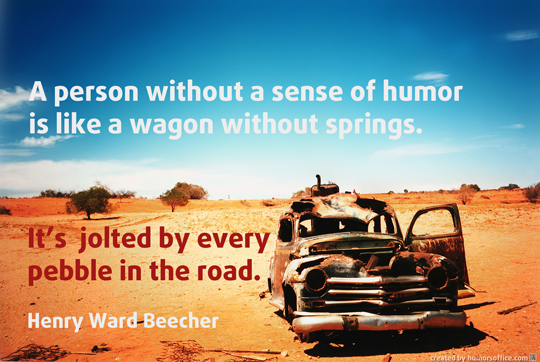 8. “A person without a sense of humor is like a wagon without springs. It’s jolted by every pebble in the road.” – Henry Ward Beecher 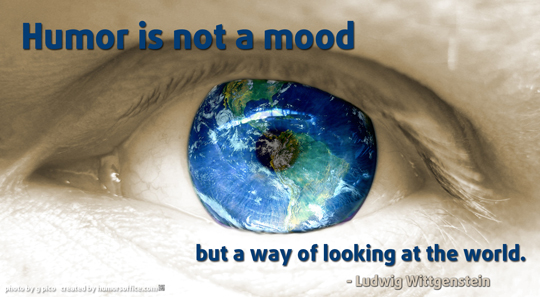 9. “Humor is not a mood but a way of looking at the world.” – Ludwig Wittenstein 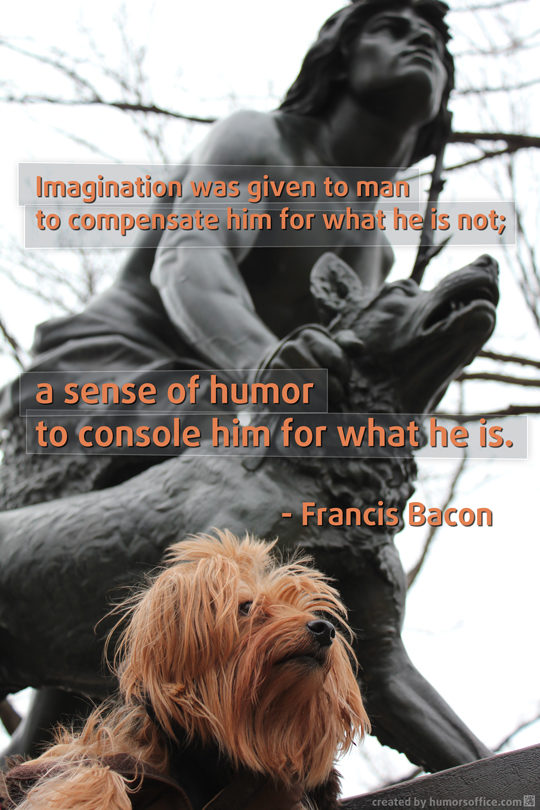 If you liked these quotations, be sure to check out our book, 50 Quotations on Humor

10 Frisson-Inducing Songs (And the Definition of Frisson) 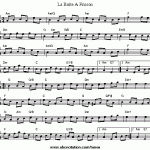 Frisson is a word that comes from French meaning “a sudden, passing sensation of excitement; a shudder of emotion;” It can often be felt when listening to particularly moving songs, or emotionally fraught moments in movies. Also real life, but it’s hard to link to real life.

Of course, frisson is hard to explain, but easy to demonstrate. For that purpose, here’s a list of 10 songs, in no particular order, that are likely to cause frisson. In fact, if you can get through the whole list without feeling a single shiver of excitement, you might want to get a Voight-Kampff test because you’re a robot, fam.

An ethereal-sounding post-rock band from Iceland, Sigur Ros exemplify why people are rightfully enthralled and terrified by Iceland.

Jeff Buckley recorded this Leonard Cohen cover in 1994. Did you know one of definitions of hallelujah is, “a musical composition wholly or principally based upon the word ‘hallelujah.'” In other words: Hallelujah! Jeff Buckley covered the hallelujah “Hallelujah.”

Steven Sharp Nelson is a cello performer who has recorded a number of popular covers of songs using solely or principally cellos. He has no stated plans to record a “Cello Goodbye” cover.

“What are you tryin’ to tell me here, little man? That you don’t like Zep?” — Brock Samson, fictional character

This piece, composed in 1910, is scored to resemble an organ in sound by dividing the orchestra into three separate sections.

6. Gustav Holst – Mars, the Bringer of War (from The Planets)

Fake history: One time, Gustav Holst wondered what the planets  would sound like if they were music. From 1914-1916, he worked to come up with an unscientific but very entertaining musical work. This is only one piece from the seven-movement piece.

Interesting fact: There are only seven movements because Earth did not get one, and Pluto was getting cold dissed even back then. (Actually, Pluto wasn’t discovered until 1930).

According to legend, Death appears every year at midnight on Halloween, and raises the dead to dance for him until dawn. Danse Macabre is a figurative representation of this: the violin solo is the devil fiddling, the xylophone represents the rattling bones of the dead, and the oboe at the very end is the rooster’s crow signaling dawn.

And you thought classical music was boring.

9. Interpol – Hands Away
Interpol is an indie rock band from New York City, a place that might not know salsa, but sure knows music.

Franz Liszt was a 19th century composer, conductor, and piano virtuoso. Which is true, but inaccurate, considering the guy was an absolute rock star.

This is how I like to imagine Franz Liszt

A company’s logo can represent a lot of things. It can just be something we use to identify a brand, it can give us a sense of what their brand is about, or it can have some hidden meaning that alludes to the company’s mission or heritage. Here are 10 logos with hidden messages.

Amazon.com has a fun, playful attitude about it’s site and their selection makes many people smile when they find what they want–thus the yellow line creating a smile in their logo. But more important to Amazon is that they sell almost everything, everything from “a to z,” which is where the logo really gets clever: the smile is also an arrow going from the letter ‘a’ to the letter ‘z.’

Baskin Robbins, like most ice cream places, projects a sense of fun with their stores and products (like flavors named “Love Potion.”) Their logo uses a playful font to clearly show “B R” for Baskin Robbins, but there’s also a hidden message. The pink shading it also shows “31” for their original 31 flavors of ice cream.

Eighty 20 is a niche consulting company based in South Africa. They specialize in data analysis, making their logo even more impressive. At first glance it seems to just be random blocks, but if you take blue block as a ‘1’ and each grey block as a ‘0,’ their logo becomes binary for 80/20. This design cleverly and succinctly let’s you know what the company is about–using data in a unique, creative way.

Goodwill is all about helping those less fortunate happy by providing gently used clothes and other items at deeply discounted prices. For many people, it brings a smile to their face. Notice the shape of the face and then look at the shape of the ‘g’ in “goodwill” and you’ll see that smiling face is represented twice.

Greenberg Brand Strategy is a global research and strategic consulting company. They “listen to” (do research on) everything that’s being said about a company, use that to generate questions for the brand to think about, and then work with them to find answers and take action. All of that is represented in their simple logo showing an ear, where a question mark is the inner part of the ear.

The Hope for African Children Initiative is a pan-African effort created to help children who have been orphaned by AIDS or who have parents who are sick or dying from AIDS related illnesses. Their logo shows at first glance the African continent in the negative space, but what makes the shape of it? The outline of an adult and child, who the Initiative is trying to help bring together.

FedEx is a well-known delivery company that is always moving. The logo seems normal at first, but notice the whitespace between the ‘E’ and ‘x.’ The arrow symbolizes that they are always on the go and moving forward.

The Museum of London is, well, a museum in London. One that shares the history of the city. Though the background colors in their logo look random, they actually represent the geographic area of London and how it has changed over time. Even in the logo, the museum is holding true to it’s mission.

The logo for Toblerone pays homage to it’s history in two ways. The first is the image of Matterhorn mountain, part of the Swiss Alps. The second is the hidden bear in the mountain, which honors the fact that the sweets were founded in Bern (Bear), Switzerland.

When you think about Tostito’s chips, you often think about a party and sharing them over some salsa with friends… or at least that’s the equity of the brand. You see it in their TV commercials and print campaigns–Tostito’s means fun with friends. Their logo incorporates that same idea: the two ‘t’s are eating dip out of the tittle of the ‘i.’

Good message on accepting that not everything will be perfect.

Some great rules from improvisation and how it applies to life. (Video quality is not great)

Scattered through the hilarity that is Will Ferrell are some great words of wisdom. (Video quality is not great.)

Mostly humor, but a great way to start a high school graduation. (Video quality not great.)

Some great humor points and the basic rule of improvisation.

Humility and humor, a great combination.

Just an overall great speech from one of my idols.Bill Watterson Commencement Speech

Mostly humor but some incredibly poignant words of wisdom at the end.