You hear the word humor a lot. People talk about office humor, sense of humor, a guy named Hugh Moore… What is humor, though?  What is a sense of humor?  What is the difference between humor vs comedy?

Before reading on, see if you can think of the definition. Got a guess?

No seriously, think of something, I’ll wait.

Ok, so what is Humor? The word Humor, as defined by Random House Dictionary, means

Were you close? I know the first time I looked it up, I was way off. I mean the definition doesn’t mention anything about laughter or jokes, how can it be humor?  I had to find out.

Humor vs Comedy vs Jokes

To better understand what is humor, lets look at two other words most people relate to humor – comedy and jokes.  The House of Random says Comedy is:

any comic or humorous incident or series of incidents. [2]

And a Joke is

something said or done to provoke laughter or cause amusement. [3]

Do you remember studying for the SATs and standardized tests and having to do those logic problems?  They tested if you understood that all lions are cats, but not all cats are lions? That’s what the relationship of humor, comedy and jokes is like: all jokes are comedy, and all comedy is humor, but not all humor is comedy and certainly not all jokes.

So What is Humor?

As the definition states, humor is anything that causes amusement. The joke “A leader of an orchestra was recently electrocuted, proving after all, he was a good conductor” is humorous (to some at least), but so is a smile.

Humor in the workplace could be watching episodes of The Office during lunch or taking a break to play some foosball – it’s whatever can cause amusement.

The important thing to remember is that humor, in it’s many forms, is beneficial to the work and life. Office humor makes the “9-5” more enjoyable.

Many people assume that in order for something to be deemed humorous, it must evoke laughter. And while stand-up comedians may use that as a measure of success, that’s not the case for humor at work. Anything that relaxes the body, gets people to breathe, causes a smile, or elicits happiness is humor.

In fact, the tendency in the corporate world is to suppress laughter.  And as silly as it seems, there are a number of reasons why people don’t laugh at work.  But the use of humor can help change that.

With our new understanding of humor, you start to see how easy it can be to bring it into the workplace and have some fun at work. Fun at work? Isn’t that an oxymoron? First, don’t call me a moron, and second, of course not.  As Dale Carnegie, author of How to Win Friends and Influence People, said

“People rarely succeed unless they have fun in what they are doing.”

Humor That Works has more resources on Workplace Humor

Now that you understand humor, its’ time to start using it to help yourself, your team, and your entire company. You can find some ideas to get you started under How-To Humor.  If you’re still not sold on the benefits, check out our Start Here page to sign up for the Humor Newsletter and/or read our famous blogpost on the 30 Benefits of Humor at Work. 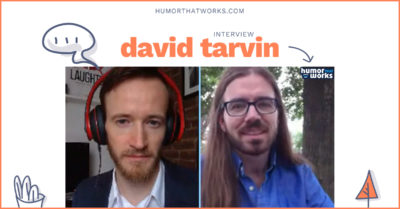 Humor in the Classroom, An Interview with Dave Tarvin

On this episode of Humor Talks, we’re chatting with Dr. Dave Tarvin, PhD. Dave is a lecturer at Texas A&M […]

How to Build a Virtual Task Force and Keep it Running

Note: This is a guest post by Robert Cordray. I’ve added some humor notes to go along with the great […]