Looking to innovate holistically, quickly, and in a way that actually pleases your customers?  Take a bit from stand-up comedy and keep getting on stage (in front of your customer) to refine your act (product).

Many great comedians have said that the best (and perhaps only) way to get better as a stand-up comic is to get as much stage time as possible, to get out and perform as often as you can.  When Jerry Seinfeld first started, he was doing as many as 4 shows in a single night, bouncing from open mic to open mic, working on his material.

There are two main reasons for this:

What’s all of this have to do with breakthrough innovation?  More on that in a minute.  But first…

Some of you might be wondering, but Drew, “If you’re creating a product or service for a customer, can’t you just ask the consumers what they want once and then go make it?”  Nope.  That doesn’t work for the same reason I can’t just ask the audience what will make them laugh and then say it.

The customers and audience don’t actually know what they want.  They might have an idea, but they don’t really know, just like you wouldn’t really know how to answer “What makes you laugh?”  You might say things like observational humor, or jokes about penguins, or a solid, almost unbearable pun–but that doesn’t tell me what I should actually say to get you to guffaw.

Pleasing customers is about listening to what they say they want, but also seeing what they actually need, whether or not they know they need it.  The only reason why jokes even work is because they set an expectation and the surprise and delight the audience by breaking that expectation.  Audiences don’t laugh at jokes they can guess the punchline to.    Similarly companies that deliver breakthrough innovation don’t deliver exactly what their customers asked for–they give them something better.

If you can listen to what a customer says, and observe what they actually do, you can deliver a product or service that actually meets their needs.  But how do you deliver something that combines what the customer is asking for with what it doesn’t even know it needs?

Enter the corporate equivalent of getting on stage 4 times in one night: what is more commonly known as “Rapid Prototyping” *ba don na na* (that trumpet sound is hard to phonetically spell).  One of the most efficient and rewarding ways to innovate is to use rapid prototyping (this is especially true in the IT world where systems and applications abound).

Rapid prototyping means: you talk to your customer, find out what it is that they think they want, go and mock it up, and take it back to them to make changes.  This allows the consumer to decide what they do and don’t like, and gives you instant feedback to create a product that they will truly enjoy.  And just like every time a comedian gets on stage, every iteration gets you closer to delivering that perfect punchline (product) that has your customers  rolling in the aisles (paying you large sums of money that you can roll around in).

If you’re thinking think “Well maybe the customers don’t know what they want, but considering our history of success at [insert company name here], we already know what will sell,” you’ll do better than the average Joe Schmoe, but you’ll also experience failure.  Just as the great comedians don’t always know if a new joke will “kill” or “die” (“killing” in comedy is good, “dying” is bad), big companies can never know for sure that an idea will be successful–look at the “New Coca-Cola” blunder of the 1980’s.

So what can you do? You can get out on the road and “perform” in front of your audience, make them laugh, and improve your set.  That’s what rapid prototyping is all about, and that’s breakthrough innovation.

The intern – we all know one, you may have even been one, there’s even a movie starring the one […] 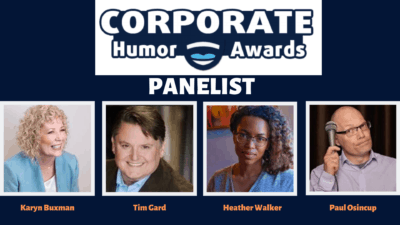 Why Don’t You Laugh? Abraham Lincoln Humor and the Seriousness of Humor

People sometimes tell us that they think their workplace is too serious for humor. We ask them if it’s more […]