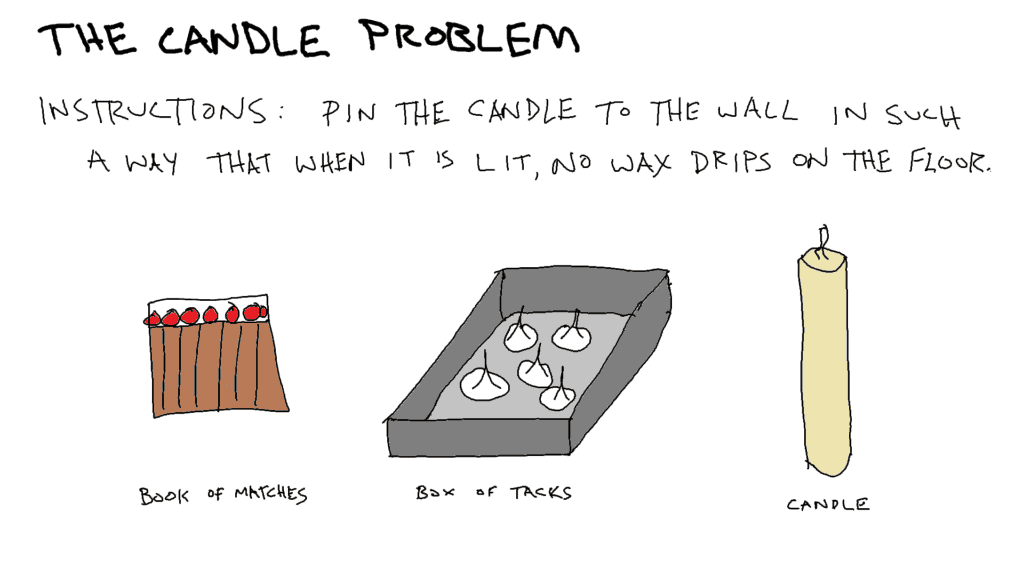 The classic candle problem. You walk into a room where you find a table pushed against the back wall with three things on it: a book of matches, a box of tacks, and a candle.

Above the table is a corkboard. Your instructions are to affix the candle to the corkboard in such a way that when you light the candle, no wax will drip onto the table or floor beneath it. You have 10 minutes to complete the problem.

Can you solve it?

This a famous scenario known as the Candle Problem that was used in a study understanding the impact humor has on creative problem solving.

As you may have guessed, humor and creativity go together like two Ps in a pod (I’ve never understood that saying, there’s clearly only one ‘p’ in pod…).  But nevertheless, it’s true.

I discovered this through experience, but psychologists figured it out… however psychologists figure stuff out.  Research suggests that humor and creativity go together because, in both, you’re tying things together in a new way, seeing new connections[i]. In fact, humor is highly correlated with both creativity and intelligence[ii].

The link between humor and creativity isn’t new—studies dating back to the 1950s have documented their close relationship. What is new is understanding why the two go together: a dose of humor releases the chemical serotonin in your brain, which improves focus, increases objectivity and improves overall brainpower[iii].

The chemical can be powerful. Studies have shown that simply watching comedy films can improve creative problem solving skills. In one study, students were split into groups. One of the groups watched a humorous film, one watched a neutral film and one watched no film at all. They were then asked to complete a task that involved using problem-solving skills.

Can you guess what the task was? The Candle Problem.

Are you ready to try solving the problem? If you need some comedic inspiration, check out this clip of Steven Wright:

Ready for the answer? See the Candle Problem solution.

20 Things To Do to make an Elevator Fun!

Using more humor in the workplace can be as simple as doing things to make an elevator fun! Here are […]

How Humor Can Help Nurses

I’ve long been a believer that humor can help heal. In this guest post, Heather Green shares how humor can […]

1 thought on “Problem Solving with Humor – the Candle Problem”