Unlike the corporate world, the realm of stand-up comedy is less structured and requires more personal discipline to be productive. There is no boss to assign you something to do, and there’s no one looking over your shoulder making sure you do your work. And while some comedians are blessed with the ability to just “be funny,” many others spend years perfecting both their craft and their work habits–Jerry Seinfeld being a perfect example.

While you may never need to step on a stage to make a room full of strangers laugh, you do need to get things done. Here are 5 tips from the stand-up comedy world to make you more productive.

“Sometimes in the middle of the night, I think of something that’s funny, then I go get a pen and I write it down. Or if the pen’s too far away, I have to convince myself that what I thought of ain’t funny.” – Mitch Hedburg

Stand-up comedians are notorious for having jokes written down on napkins, envelopes, or backs of receipts. It’s not because comedians hate notebooks or lined paper, but because comedians know that inspiration can strike at any time. It’s so easy to get distracted by something else and lose that idea forever, unless we write it down.

The same is true for every type of work–great ideas or new items to add to your task list can pop in your mind at any time.  Getting these ideas off your mind and into your note capturing device ensures it won’t be forgotten and frees you to think about other things.  This is one the keys to David Allen’s Getting Things Done system (he calls it the “Collection Habit”).

You can save yourself the time from searching for something to write on by always carrying a note-taking device such as a small pen and pad, a voice recorder, or a phone you can takes on. Most comedians have archives of notepads full of ideas–some that make them famous (such as George Carlin’s 7 Words you can’t say on TV) and others that don’t quite make it. But the key is they have them recorded to be reviewed and expanded or discarded later.

As a nationally touring comedian, you’ll have anywhere between 45 minutes to 2 hours worth of material. But no comedian started out writing a 2-hour show.

When you first get started in stand-up, you are generally performing 5-minutes at a time. As you improve and get bigger and bigger shows, you naturally build up to having a 45-minute show.

Whenever we start a new project, such as writing a book or implementing a new system at work, the end goal can be intimidating. But if you break your project into “5-minute sets” or smaller tasks, the project becomes more manageable. Then, as you complete each task, you’ll be closer and closer to your 45-minute set.

If you ask any professional comedian what the key to success is, they’ll tell you it’s getting on stage as often as possible. The idea is simple–the more you perform, the more you’ll work on your material, hone your craft, and improve your performance. But there’s a tendency among comedians to spend most of their time watching or reading about how to become better.

And while this certainly is advisable when first starting out, it often becomes an excuse for not doing the work, a cleverly disguised form of procrastination. It’s also the least effective way of learning or improving.

“Learning music by reading about it is like making love by mail.” – Luciano Pavarotti

Watching other comedians perform will help, but it doesn’t replace actually getting on stage. The same is true for any project. That doesn’t mean working long hours toiling away, but it does mean doing something. If you’re remodeling your kitchen, you can find inspiration by looking through renovation magazines, but you won’t be any closer to your goal until you actually take action.

Get on stage, do your time, and get stuff done.

Comedians live and die by the laughter and responses they evoke from the audience. If a joke consistently elicits a huge guffaw from the audience, a comedian knows it works and will continue to do it and write more jokes like it. If the joke results in silence, it’s clear something needs to change.

This immediate feedback is invaluable as a performer, and in any project. Stopping to ask for ways to improve a presentation or what went well in a particular meeting can guide you in finding what works and what doesn’t. Then you can start working on the right things–working smarter and not harder.

One key thing to note is that feedback doesn’t just have to come from other people. Comedians record their performances all the time so they can go back to evaluate a performance. Checking in with yourself periodically or tracking your daily progress can help you find what it is that makes you productive.

Most comedians make a set-list before every show of all the jokes they are going to tell–essentially a task list for the stage. This list is crucial to being succinct and clear, and is the equivalent to having a well-oiled GTD system for to do items.

The problem is that things don’t always go according to plan, and the skillful comedian is able to improvise when necessary or when an opportunity arises. An unusual answer to a normal question or a beligerant heckler can be great launching points for a comedian to improvise a hilarious bit on the spot.

In the real world the same is equally true. While we may have a great 5-year plan of what we are going to do, sometimes it’s necessary to sieze an opportunity and go off script. This mentality and comfort in improvising when need be can lead to life changing events and improved productivity in a direction you never imagined.

“I think luck is the sense to recognize an opportunity and the ability to take advantage of it. The man who can smile at his breaks and grab his chances, gets on.” – Samuel Goldwyn

Standing Up for Productivity

Stand-up comedy may not be rocket science or even project management, but the craft calls for and creates a valuable set of skills. These same skills, when applied to work and personal goals and challenges, can improve productivity and help you get things done. So take a page from the comedy world and start using these tips today–turn this information in to knowledge.  After all,

Congratulations to the 2014 Corporate Humor Award Winners! Check out the winners below, see the Full List to learn why […] 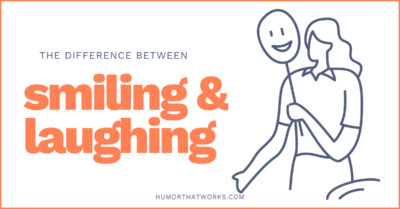 Smiling and laughing are often associated together, and while they often occur together, there is a distinct difference between smiling […]