The Differences Between Dashes

My editor gave me a note to help me understand the differences between types of dashes when working on my book (see the original here):

When to use each: 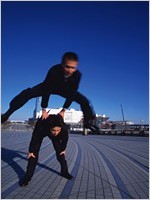 As a kid we spent many-a-day playing games with our classmates and neighbors. Once you’ve entered the corporate world, that doesn’t change. Here are 9 kids games adapted to the Corporate World.

Leap Frog. Spend years building your skills to get promoted to your dream position. Right when you think you’re going to get that promotion, get passed over for someone new to the company or that is close friends with the boss.

Spin the Bottle. Gather for your weekly status meeting. Spin a bottle on the table. Whoever it lands on is stuck working late that night.

Kick the Plan (and Update It With a New One). Set the plan you’ve been working months on in the middle of the floor. An executive runs over and kicks it over (because of budget cuts, time constraints, or just because). Work diligently on a new plan. Repeat.

Red Rover, Red Rover, Bring the Memo Over. Email a document to a senior executive. Wait 3 days, never hearing anything. Finally print out the document and take it to his desk.

Pillow Forts and Gate Reviews. The night before a major gate review, bring in pillows for the all-nighter you’re going to pull. Build a fort at 3am when you should be working.

Hide–And–Scope–Creep. Hide out in your office before your next meeting before your project sponsor. Leave your office for just a second and get caught by your sponsor who wants to add scope without increasing the budget or moving the deadline.

Duck, Duck, Choose. Have way too many projects to work. Click on each project folder until you yell “Choose,” then run around trying frantically to complete the project before coming back and starting again.

Padding Cake. With a coworker, add in some buffer time (padding) to your project schedule to account for changes and set-backs.

Tether–Phone. Work from a remote location with your team. Have your Wifi connection drop so you have to tether your phone to access email. When you exceed your data plan, switch to a team-member’s phone.

Note: These examples are tongue-in-cheek, but studies do show that play can be great stress relief. Find out more on the value of play.

The funniest jokes from a survey of the Top 50 Funniest Jokes:

I was reading a humor article recently when I came across this interesting reference from Personality and Sense of Humor by Avner Ziv:

Justice is carried out in accordance with an ancient custom that tests humorous ability.

That piqued my curiosity so I did a little more research and found this excerpt from Man’s Rise to Civilization:

In Alaska and in Greenland all disputes except murder are settled by a song duel… The song duel consists of lampoons, insults, and obscenities that the disputants sing to each other and, of course, to their delighted audience… The verses are earthy and very much to the point: they are intended to humiliate, and no physical deformity, personal shame or family trouble is sacred. As verse after verse is sung in term by the opponents, the audience begins to take sides; it applauds one singer a bit longer and laughs a bit louder at his lampoons. Finally he is the only one to get applause, and he thereby becomes the winner of a bloodless contest.

And this guide to Inuit culture, stating:

Certain Inuit groups, including some from the Central Arctic and Greenland, used ridicule in the form of song duels as a means of conflict resolution… The entire community would observe the competition and thoroughly enjoy the wit and humour of the songs. Usually there would be no specific mention of the particular reason for the conflict in the song… Each contestant would disparage his opponent’s character,
sexual vitality, honesty, strength, ability to hunt and virtually any aspect of a person’s life where they would be sensitive to criticism. The person who had composed the most cutting, humorous and witty song received the most positive response from the audience and would be considered the winner.

It seems that the custom may no longer be used, but that still doesn’t mean the Inuit’s aren’t awesome. They effectively started rap battles, and a lot more was riding on the outcome than just pride. It’s a good thing it’s changed though, otherwise MCs like Cassidy or Eminem would be able to get away with just about anything.

In honor of the Inuit custom, here’s a rap battle between Dr. Seuss and Shakespeare (FYI this is mostly safe for work, but there are a few cuss words):

A redditor asked an interesting question: Explain your job in two ways: first making it sound as complicated/hard possible, second as easy/simple.

Here are some of the best descriptions:

Hard: I oversee the process of colliding quadrillions of subatomic particles into other atoms in a precisely controlled fashion in order to generate a self-sustaining chain-reaction, which generates heat in the form of kinetic energy.

Hard: I’m assessing the effects of ethanol on cognitive tasks including episodic-like memory and neurophysiological markers such as synchronous local field potential oscillations.

Easy: I get rats drunk.

Easy: I am unsuccessfully searching for work.

Hard: I am involved in a multi-disciplinary work environment. I work nine hours a day, with my tasks shifting depending on what is expected of me at the given hour. I am allowed very little say in what goes on, and am expected to follow the word of my superiors to the letter.

Hard: I regularly heat up muscle to around 400 degrees Fahrenheit until the Maillard reaction occurs in which the denatured proteins on the surface of the meat recombine with the sugars present.

Hard: I have to read my boss’s mind.