From the website WorkJoke.com.  Be careful, there are plenty of bad jokes there, such as this one:

A project manager, a software engineer, and a hardware engineer are helping out on a project. About midweek they decide to walk up and down the beach during their lunch hour. Halfway up the beach, they stumbled upon a lamp. As they rub the lamp a genie appears and says “Normally I would grant you three wishes, but since there are three of you, I will grant you each one wish.”

The hardware engineer went first. “I would like to spend the rest of my life living in a huge house in St. Thomas with no money worries.” The genie granted him his wish and sent him on off to St. Thomas.

The software engineer went next. “I would like to spend the rest of my life living on a huge yacht cruising the Mediterranean with no money worries.” The genie granted him his wish and sent him off to the Mediterranean.

Last, but not least, it was the project manager’s turn. “And what would your wish be?” asked the genie.

“I want them both back after lunch” replied the project manager.

The Pain of Working Globally

Every now and then you overhear something in the office place that just makes you laugh – often times because it’s out of context, is a simple mistunderstanding, or is just two people conversing at their “finest.”

Well OverheardintheOffice is a site dedicated to things:

The Pain of Working Globally

Boss: Call England and find out what time it is.
Assistant: Call who in England? England is 5 hours ahead of us, so it’s 4:17 there.
Boss: Can you please listen to what I have to say and just call England? I need to be sure.
Assistant, two minutes later: I called England, and it’s 4:19.
Boss: See, it pays to double check. You were 2 minutes off. 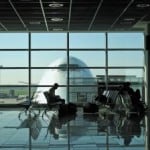 I got delayed on a short-flight to Cincinnati a little while back so I decided to attempt to write a humorous poem.

Sitting in the runway, with nothing to do,
I pulled out my pad, to write a joke or two.

Nothing comes to mind, so I’m starting this rhyme,
Just as a way to, you know, pass the time.

Looking at the planes, just coming and going,
I think I need a haircut, cuz it is really fro’ing.

Wow that was odd, what a weird thing to say,
Who knows what will come out, when your mind is at play.

So I’m forced to sit, and think a little longer,
With each passing minute, the reseltessness gets stronger.

I just now realized, how odd it must seem,
That my stream-of-conscious thoughts, are all rhyming-ing.

Wouldn’t it be weird, if this was how we all spoke,
It’d be hard to write an email, or even a joke.

For the sake of boredom, let’s give it a try,
Maybe it’ll be so funny, that you’ll want to cry.

What do you call a platform, for the greatest warrior in the land?
Nothing is as fitting, as a “One Knight Stand.”

Ok I’ll admit, maybe that wasn’t the greatest,
But what do you expect, when Monty Python’s on your playlist.

I just had a thought, I wonder how long this can go.
I started this poem, over 15 minutes ago.

We’re finally taking off, only a 90 minute delay,
I should almost be in Cincy by now, stupid US Airways.

As we lift into the air, I can’t help but think,
I wonder if I should request, a water to drink.

The stewardess just passed, I asked for the water.
Or maybe it’s “flight attendant,” ah what does it motter.

That’s the second time, I’ve used an approximate rhyme.
My speech is getting as eloquent, as a silent mime.

I don’t want to be mean, or get any violenter,
But if you kill a mime, do you use a silencer?

I’m at 30 minutes now, and I’m starting to wonder,
Is anyone still reading, or have they all fell to slumber?

Ah blessed sleep, I wish I could drift off right now,
But alas the contacts in my eyes, would make that a party foul.

Instead I sit here, and continue to write,
Wondering how much longer, I have on this 2 hour flight.

I realize now, that my handwriting is scratch,
Like someone tried to write, with their fingers detached.

They say small handwriting, means low self-esteem,
I must feel like, the last kid picked for a team.

My handwriting’s so small, I could write a novel on my arm,
I have an appendix I could add, without doing any harm.

See what I did there? You are witnessing art.
I started on a book, and ended on a body part.

Which that makes me think, of yet another joke,
This one is about, a rather incompetent young bloke.

If you thought that was dumb, it’s ok to be mean,
You’d be like the average person, if you know what I mean.

Wait can you use the same word twice, to make a valid rhyme,
If the meaning and definition, are different each time?

Another thing to ponder, an hour into this prose,
I have to wonder if this was the best thing, that I could have chose.

But instead I’ve written my thoughts, down in two line stanzas.
That’s about as useless, as the actor Tony Danza.

Ok, I’ll admit, that was a stretch on my part,
I don’t always think of the second line, when the first one starts.

Speaking of start, how did this all begin?
Oh yeah that’s right, my plane got delayed again.

Sometime it’s fun, to go back and explore,
What your thoughts are now, and what they were before.

Like when I was a kid, I used to think Mayo was bad,
Now I actually prefer it, albeit just a tad.

They say your tastebuds change, every 7 years,
Maybe 7 years from now, I’ll actually enjoy some beers.

I highly doubt it though, I can’t even stand the smell,
And I’d have to get over my stubborness, and that’s not a likely sell.

I think I’ve decided, I don’t like the “for kicks and giggles” phrase,
I get the giggling part, but who just kicks when they play?

Maybe karate students, but I don’t see them giggling,
Unless of course they’re being taught, self-defense for tickle-ing.

Oh no, not now, a baby started squeling,
The intial scream almost, sent me through the ceiling.

I guess it’s fortunate, that we’re about to land,
I don’t know how much more of that, I can withstand.

So as we make our descent, back down to the Earth,
This monstrous poem ends, 90 minutes after birth.

I don’t exactly know, how this thing evolved,
But if you’re still here, I applaud your resolve.

So as per the usual, thanks to all of you readin’,
The rhyming conscious thoughts, of a stand-up comedi’n.