Creating a Joke with 185 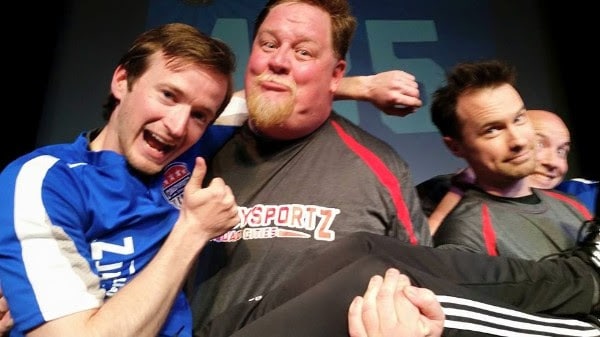 How do you create puns? It’s a question that I’m (not all that) frequently asked. And the key, like any skill, is practice.

However, coming up with something out of nothing is difficult. As I shared a few weeks ago, there is structure in creativity. And that structure makes things easier. One way to get better at creating puns (and jokes in general) is to practice them in a structured way.

This is where improv can help us, specifically short-form improv. Here’s one of the most popular joke-telling short-form game that I learned in ComedySportz:

The [blanks] are the suggestion from the audience. The [punchline] is what the improviser comes up. For example:

185 bananas walk into a bar. The bartender says, “We don’t serve bananas here.” So the bananas split.

It’s not the funniest joke in the world, but it is a solid pun and is impressive to the audience when you’ve come up with it on the spot.

So how do you actually come up with a joke? First, once you get the suggestion, in this case bananas, start thinking of words that relate to the word banana:

Then, think about if any of those words can have a second meaning or are a homonym or heterogaph. In the above example, I chose split to also mean leave. You could also pick peel (sounds like appeal) or potassium (has the symbol K).

Once you have that second meaning in your head, structure the joke so that the punchline is at the end (this is where following the framework of 185 makes it easier, the structure is given to you).

185 bananas walk into a bar. The bartender says, “We don’t serve bananas here.” So the bananas reply, “that’s not very a-peel-ing.”

Note: On this last one, I added an extra descriptor to better set up the sheepish “K” response. That’s helping with the setup.

You can do this game with nearly any noun (person, place, or thing). For example animals:

185 cheetahs walk into a bar. The bartender says, “We don’t serve cheetahs here.” The cheetahs reply, “That’s okay, we heard the service was spotty.”

Why not give it a go and see if you can come up with any 185 jokes. Feel free to respond back with your best. And if you need inspiration, here are some suggestions:

Join over 4,000 monthly readers and get a dose of humor delivered to your inbox (plus you’ll receive a free PDF of 50 Ways to Use Humor at Work).
{ 0 comments… add one }